That is why in July 2012, following a proposal from Morocco, the General Assembly of the United Nations adopted the resolution that 2014 should be the International Year of Crystallography, 100 years since the award of the Nobel Prize for the discovery of X-ray diffraction by crystals. 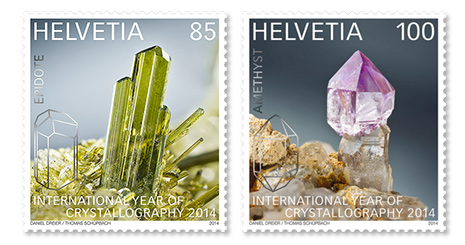 The official Swiss stamps celebrating the international year of cristallography

Swiss commemorative stamp issue The Swiss Postal Service will issue two postage stamps on 6 March 2014 to mark the International Year of Crystallography. Stamps are designed by Daniel Dreier based on photographs by Thomas Schüpbach and show natural crystals of the minerals epidote and amethyst.